On March 11, another 150 soldiers departed from Hunter Army Airfield for Europe.  Their mission is to train alongside military units of NATO allies in a display of force aimed at deterring further aggression by Russia.  They will join the other nearly 12,000 U.S. service members ordered to Europe by the Pentagon.  Watching various news clips of the troops gathering and preparing to depart, the diversity of the military was apparent.   The line of troops waiting to depart were filled with both men and women of various military ranks from various races and ethnicities.  This brought back memories of my time in the Navy as both an enlisted personnel specialist and supply officer.  After moving back home from South Korea, I enlisted in the military even though my bachelor’s degree qualified me to become an officer.  One reason was because the enlistment process was quicker; second, I wanted to have shared experiences with those I would eventually lead.

What is a meritocracy?

Sociology defines a meritocracy as a system that fosters and rewards personal effort, ability, and talent through competition to determine social standing.  Many believe our military is a meritocracy.

“Military life aspires to resemble professional sports in one particular – concentration on performance.”

Even sociologists have looked toward the military to study this idea of meritocracy. In her study examining ethnic and gender satisfaction in the military, sociologist Jennifer Lundquist found that Black men and women, Latino men and women, and White women all experience greater perceived benefits from military service than do White along several dimensions of self-assessed job satisfaction and quality of life. Furthermore, these perceptions of advantage relative to civilian reference group comparisons seem to largely explain Lundquist’s findings. As I began my own analysis of this idea of the military as a meritocracy, particularly for minority women, I obtained some interesting results.

First, it is important to distinguish between the two sides of military service. There are enlisted members and officers.  The chart below provides a look at the ranking structure of each branch of service. 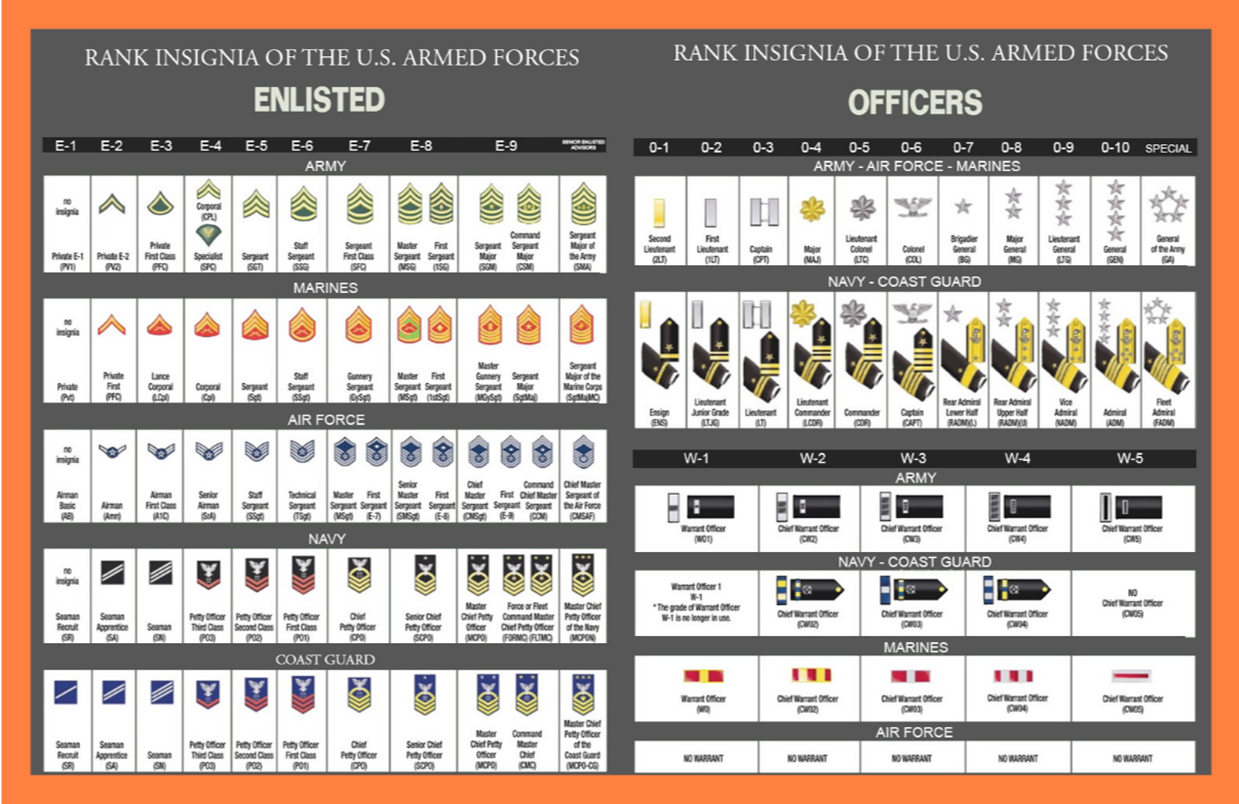 I’d argue promotion protocol for enlisted members aligns more with a meritocracy than the promotion protocol for officers after reaching a certain rank. For enlisted members, promotion is based on time in rank and other objective and quantifiable metrics. The first couple of officer promotions also are generally automatic. For example, in the Navy, after the first two years of service, an O-1 (ensign) is promoted to an O-2 (LtJG). After two more years, an O-2 (LtJG) is promoted automatically to an O3 (Lt). However, beyond this rank, promotions become more subjective due to more limited advancement opportunities. Based on my understanding, if the military is a meritocracy, we’d expect the ethnic and gender representation to be consistent across ranks. For example, if Asian women make up three percent of women in a specific military branch, then their representation should be approximately three percent for each rank group. Figure 1 shows percentages of women in the military by race in 2020. 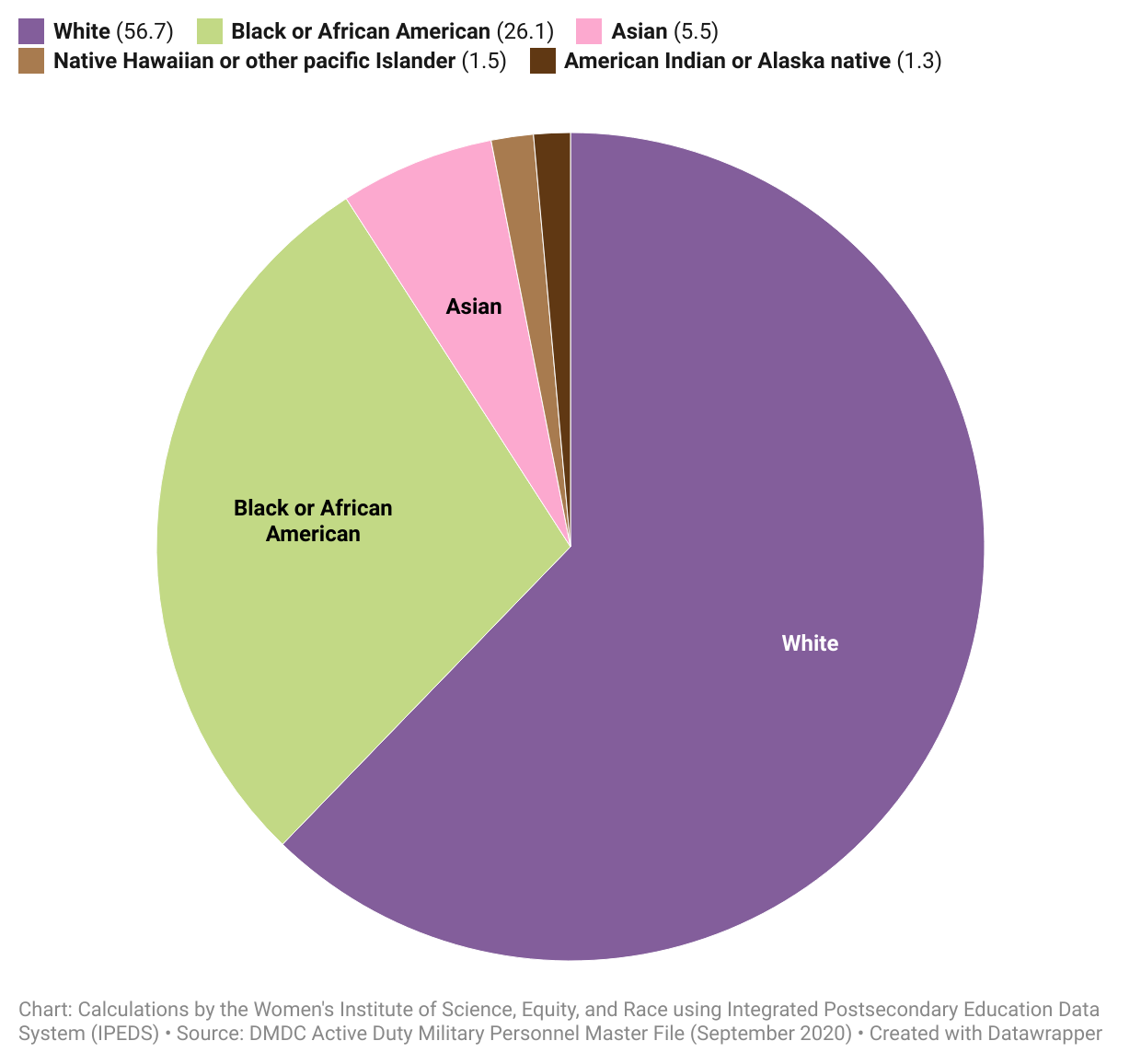 For American Indians, Asians, and Pacific Islanders, representation remains consistent across all ranks and branches of service.  However, for Black and White women the data show representation trends that increase and decrease depending on rank and branch of service. 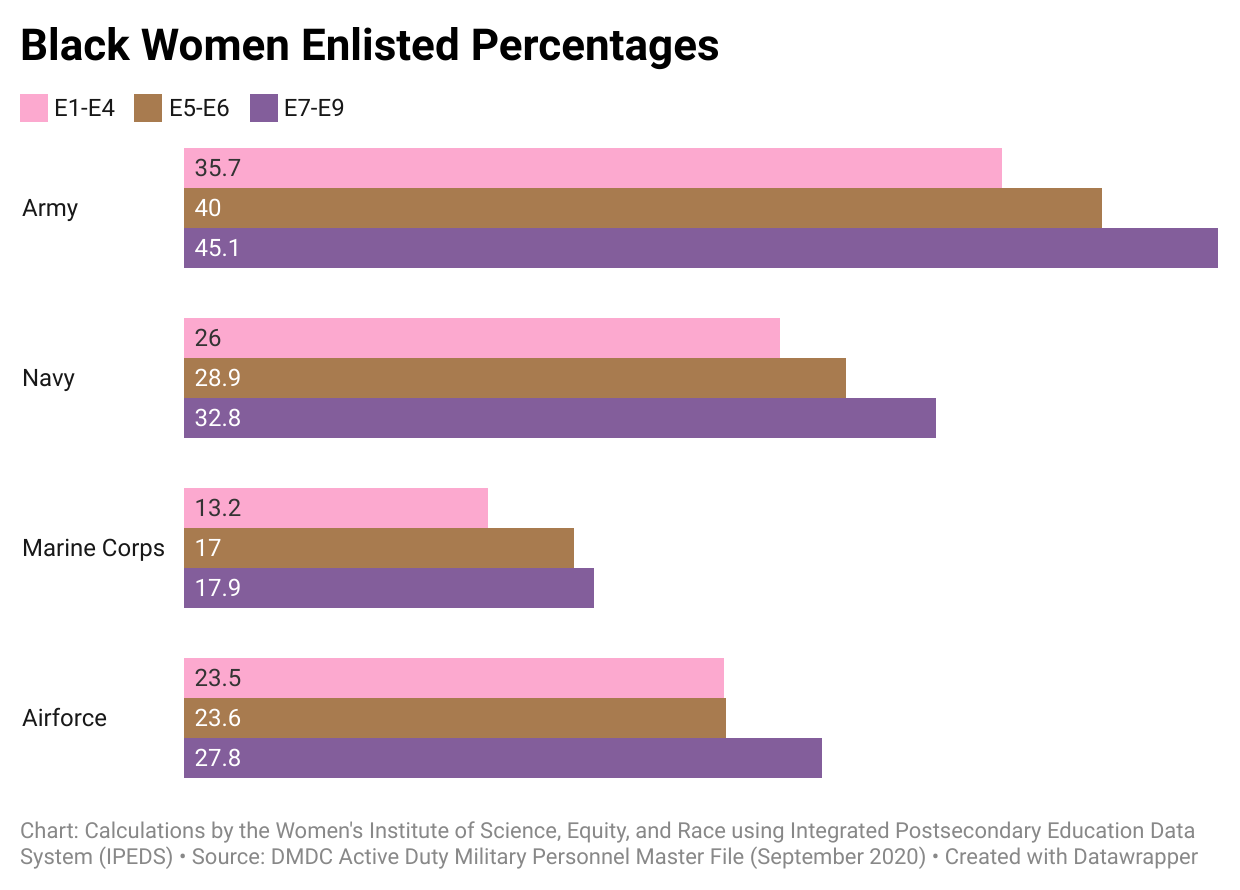 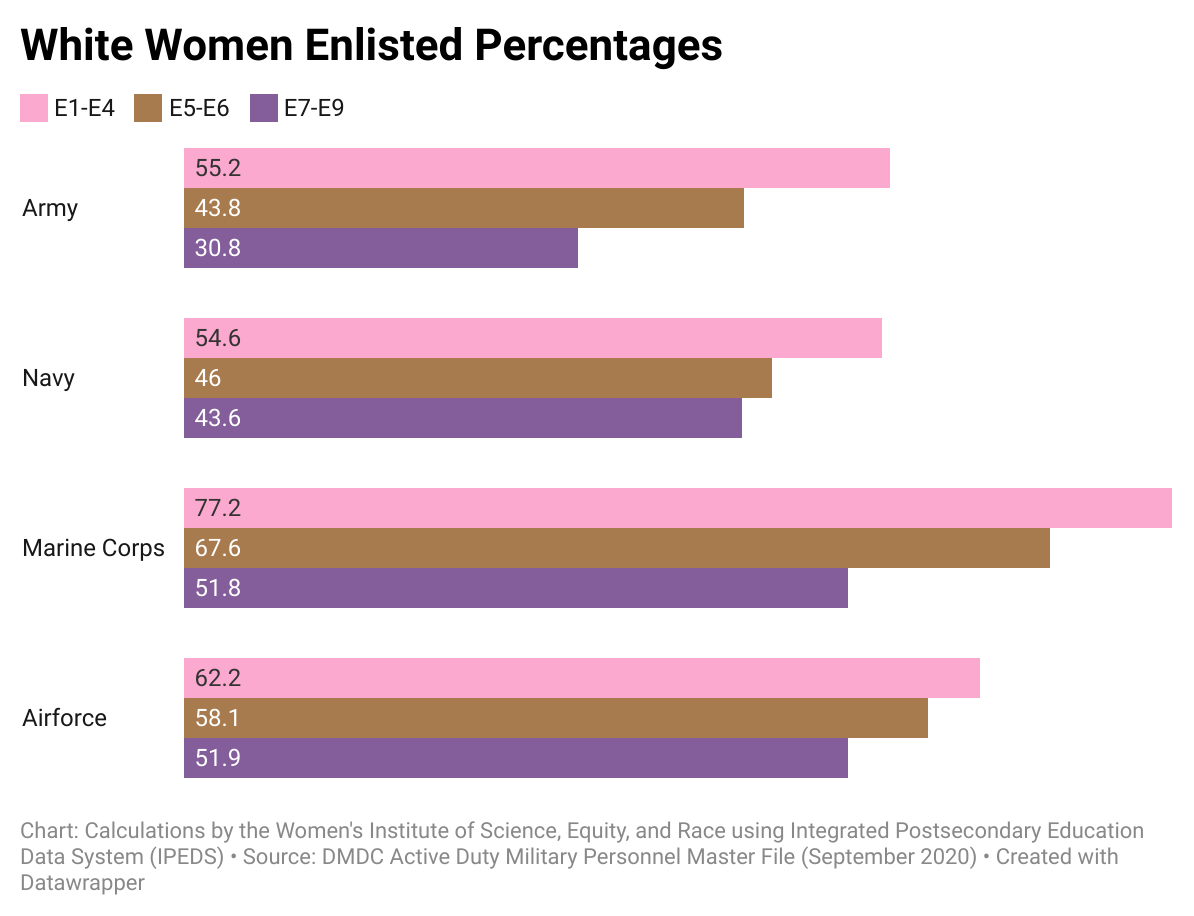 The data from the officer ranks paint a different story for Black and White women service members. Black women are underrepresented at each level from O1 to O8 for each branch of service, while White women are overrepresented in these ranks. 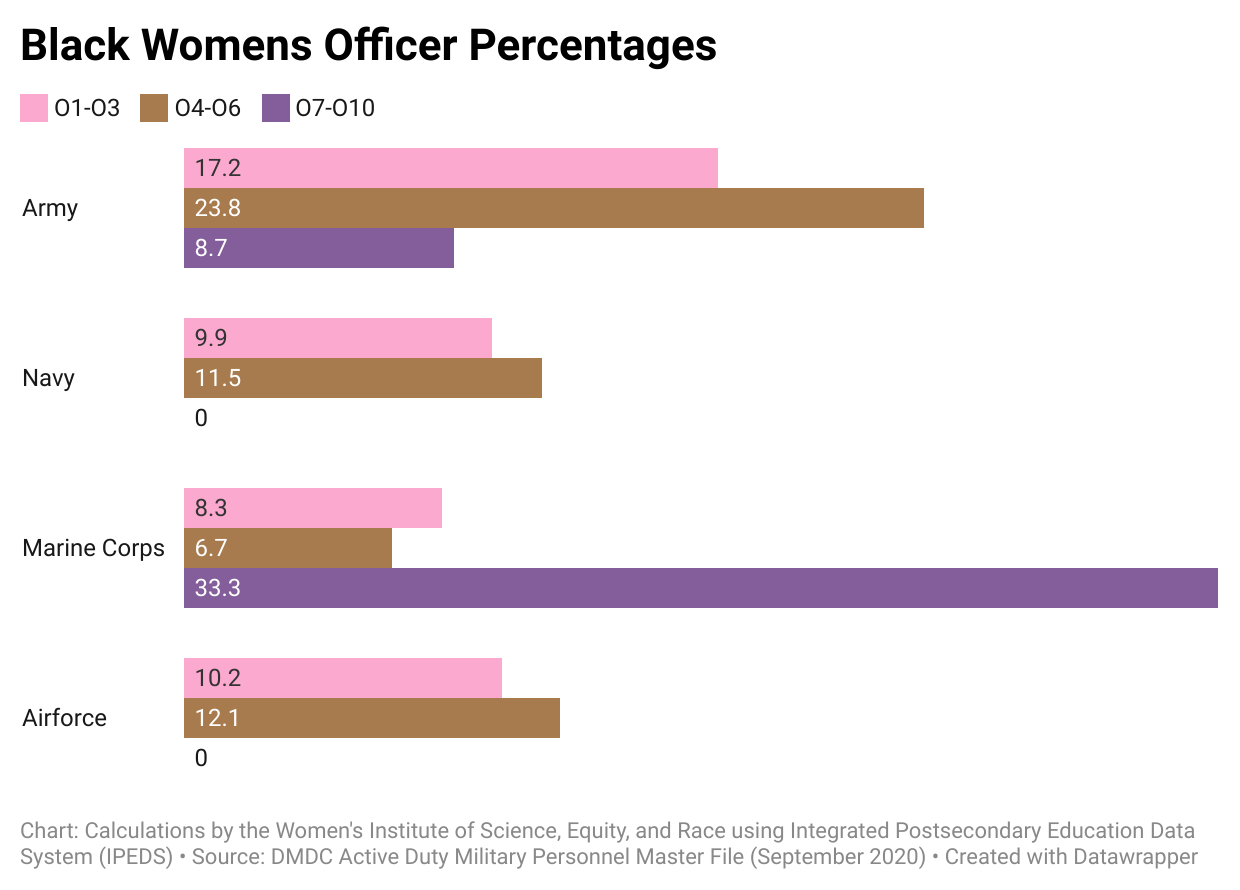 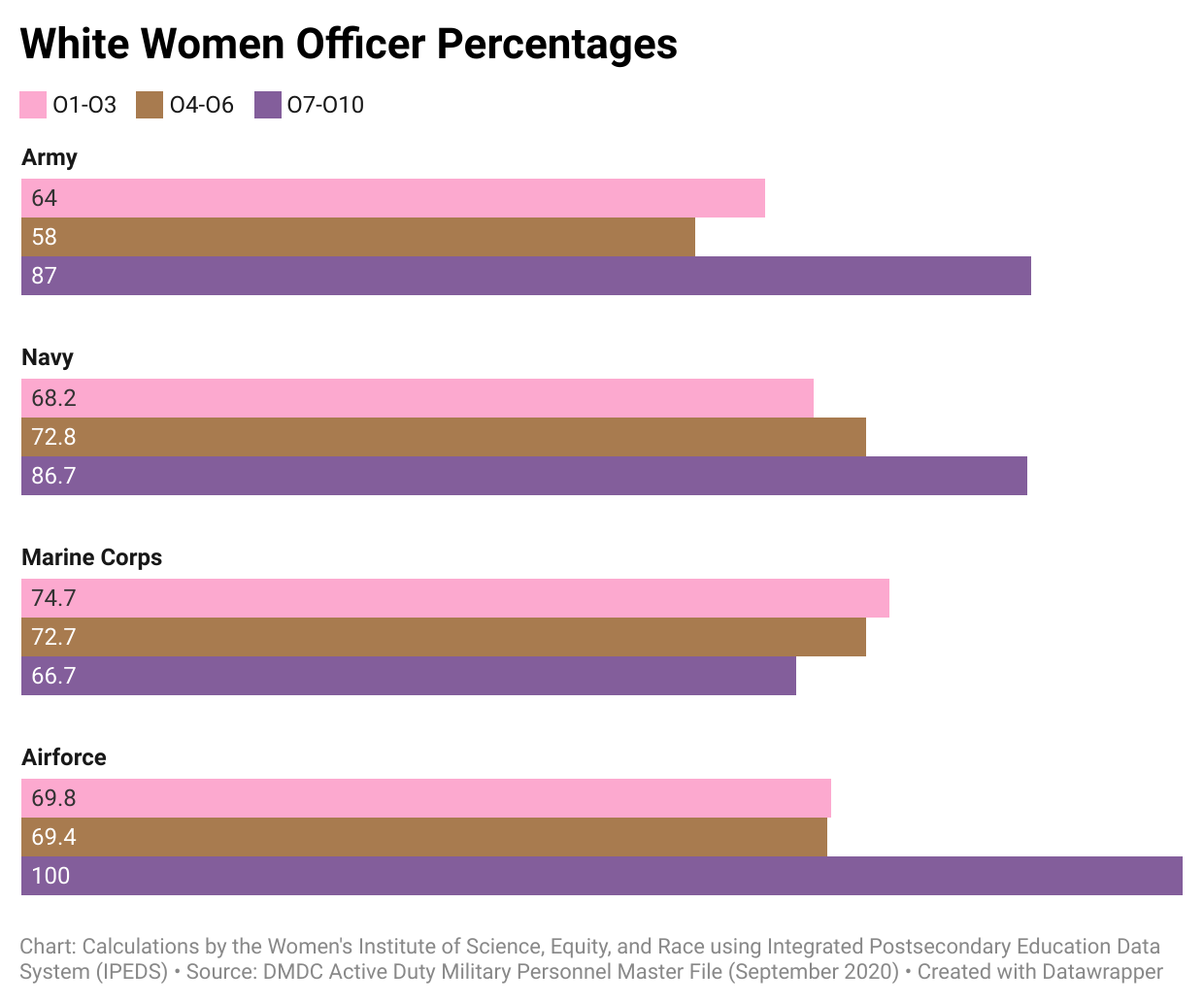 Yesterday was “Equal Pay Day.”  While there are some promotion frameworks that promote equity more than others, equal pay is something the military does get right 100 percent.  Everyone of the same rank gets the same base pay. Period!  As women continue to fight for equal pay (i.e., U.S. women’s sports), I believe transparency is the key.  Without pay transparency, it’s nearly impossible to know where and with whom to fight.

Here’s a novel idea for a new holiday: “Show Me Yours and I’ll Show You Mine Day.”